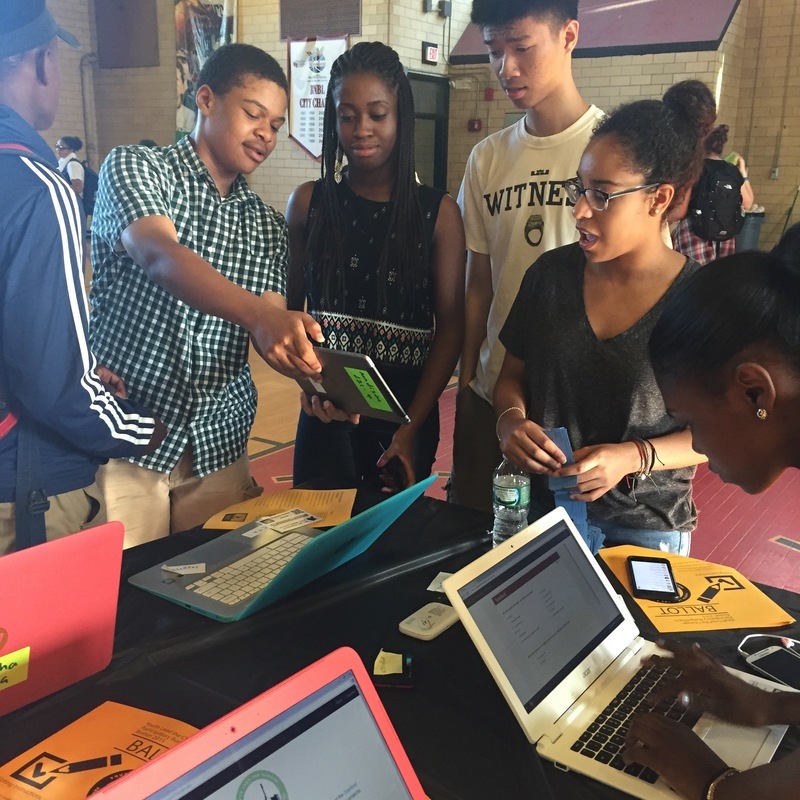 The City of Boston’s ‘one-stop shop’ resource center for youth, the Boston Centers for Youth & Families Division of Youth Engagement and Employment (YEE), uses TextIt to power the SMS messaging-based portion of its communication pipeline. It’s the largest youth employer in Boston, hiring over 4,000 youth annually to work with over 200 community-based organizations.

To further engage Boston’s youth, YEE manages social media and marketing efforts geared toward civic engagement initiatives, and distributes a monthly newsletter to over 40,000 youth, families, and youth workers across the city. All youth are welcome, as focus is placed on vulnerable youth populations including LGBTQ, homeless or unaccompanied, court-involved, and undocumented youth.

The internationally recognized division, which provides thousands of teens ages 15-18 with meaningful employment experiences and career readiness training, is breaking ground in the participatory budgeting space through its Youth Lead the Change (YLC) initiative.

Youth Lead the Change: Participatory Budgeting Boston’s mission is to empower youth to unlock their leadership potential by contributing to the management of $1,000,000 in capital city funds. The process, which takes place from November to June, includes an idea collection phase, in which ideas to improve the city are submitted; a proposal development phase, in which a team of 85 youth work with city staff to create proposals; and a ‘vote + present’ phase, in which Boston residents between the ages of 12 and 25 vote to decide which proposals get funded. The team then guides the implementation of winning proposals.

YEE has found that using TextIt as an attendance-monitoring tool improves response rates. They ask youth to send a keyword to their dedicated number to confirm attendance at events and meetings, familiarizing them with the process of interacting with a TextIt workflow. They also use keywords as hooks to encourage participation. An keyword trigger might be an answer to a question posted at an event or meeting, or through a social media post. 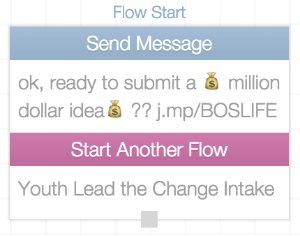 Part of YEE's SMS communication channel's success can be attributed to its clever use of shortened links. YEE often uses messages as a vehicle for richer content by sending respondents links to forms, surveys, written content or media. This is a simple yet effective way to guarantee content exposure, as an estimated 98% of text messages are viewed once delivered, and over 70% are responded to.

After they've received a link, users are placed in an intake flow designed to register youth interested in participating in the Youth Lead the Change program: 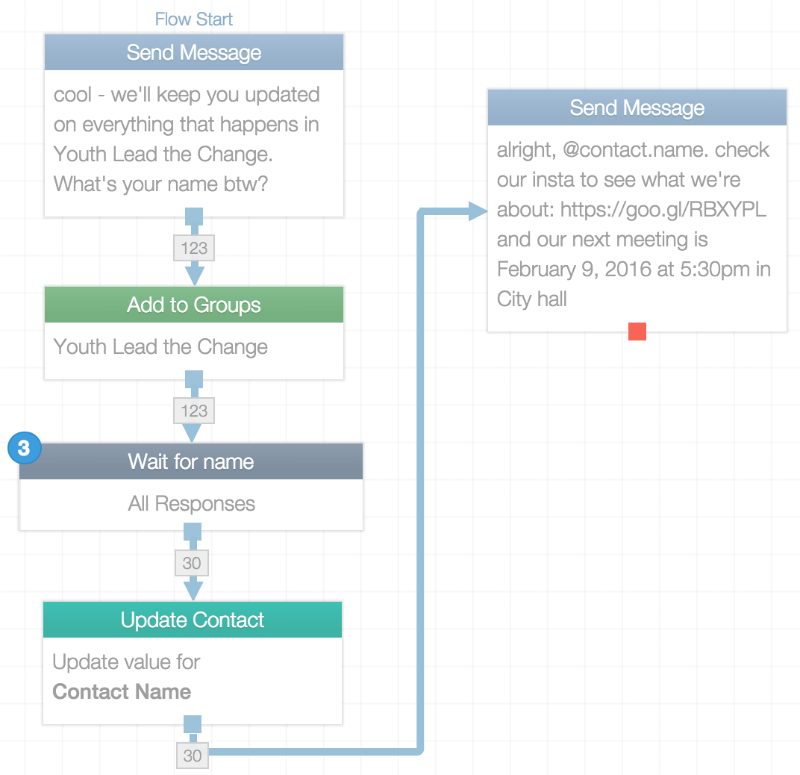 Note that YEE makes use of TextIt's grouping features, placing respondents in groups populated by intake workflows, or adding them to groups corresponding with participation frequency.

YEE also uses flows like the one pictured below to remind youth participants of upcoming events and RSVP for additional information: 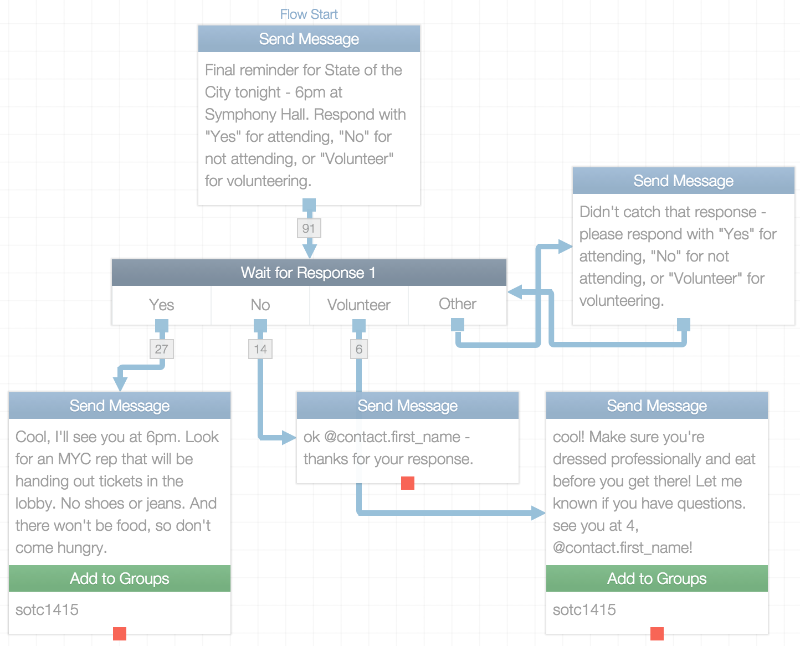 YEE's Youth Lead the Change program is receiving international attention for its approach to participatory budgeting. Francesco Tena, who heads YEE's Mayor's Youth Council, says his team is consistently responding to information requests from domestic and foreign counterparts. The program has hosted delegations from cities in China, Turkey, Tunisia, Algeria, Russia, and Lebanon. In addition, YEE has been recognized by the Guangzhou Institute for Urban Innovation and was awarded 1st place in the City Livability Awards from the US Conference of Mayors.

Tena and his team have demonstrated that text messaging is an effective communication channel for disconnected youth. Specifically, YEE has found that the following directives improve their response rates:

Visit YEE's website for to learn more or get in touch.

TextIt is changing the way organizations communicate with beneficiaries, customers and stakeholders. Whether you're interested in adding an SMS messaging channel to your communication pipeline like YEE, or building chat bot like HigherMe, you're guaranteed to increase engagement.

Follow us on Twitter to interact with a chat application built with TextIt, or create a free account to build your own. You'll be sending messages in minutes! Get in touch anytime with any questions, comments, or suggestions.

Build interactive SMS applications anywhere in the world with TextIt.

Come give it a try at https://textit.com